As promised here is a blog update on Fluffy Gunners, which by heck or high water, I am determined to keep updated as often as possible!

This last two weeks I have spent creating a slew of in-game characters and working on the UI and shop. Here is a screenshot of the character selection screen so far. 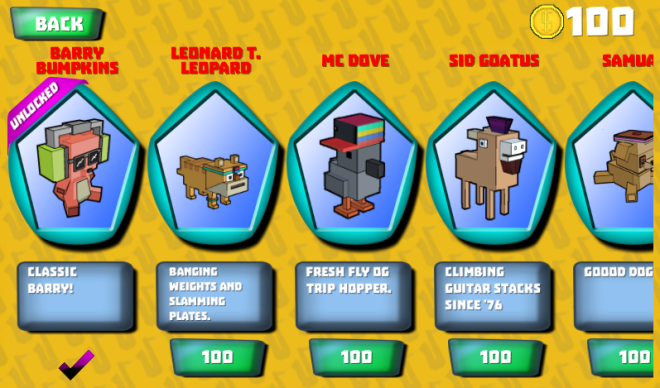 And also here is a quick rundown on how I created the characters and shop. I used 3d base animal models, in the style of Crossy Roads and easily available in the Unity Asset store. I then jazzed them up and made them unique using ProBuilder, a 3d modeling tool that’s actually used within the Unity editor. This allowed for fast production time compared to using an external application such as Maya to alter each one, also they could  be tested  straight within the editor. For the character images, I snapped screen shots using the game camera, added the lighting and bold outlines and assigned each one to the shop database.

For the shop system I have used Simple IAP, a plugin which can handles in app purchases through the play/App store and also manages the database of items, and the encryption of data to prevent players hacking your save files and adding in-game currency or items. This asset has saved me a lot of time I would have spent designing and coding a similar in-game shop system.

I’ll  be linking the shop and main screen to the gameplay and testing it over the next few days, before going on another iteration of the core gameplay.

In other news I have finally invested in a Mac Mini and an iPhone so that I can begin developing for Apple devices! The process of developing and publishing on the App store is obviously more expensive in both time and money, but the exposure and revenue from the App store should offset these challenges. The actual experience of going through the process will also be invaluable for future projects, and I can’t wait to sink my teeth into it!

Until next blog, which will have a more info on upcoming  beta testing. Adios amigos.